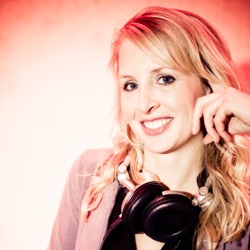 DJ Dayna’s dynamic spirit, passion for music and spreading good vibes is what led her to a career as a DJ & MC! Dayna has been entertaining at nightclubs, social events, college & corporate events, charity fundraisers, fashion shows, retail stores and weddings for over 12 years.

During college she fell in with several area mic-masters. The excitement and creativity she found behind the turntables was exhilarating and soon started spinning at venues and campus events. To compliment her live shows, DJ Dayna joined the college radio station to co-host a weekend music show.

Not long after graduation the allure of bright lights in the City of Angels called. She packed her headphones and gear, heading West to sunny Los Angeles, California!

There, she freelanced as a DJ, MC, and dancer for events. She hosted DJ battles for Astro, LA’s original DJ store, and hosted a weekly radio show in Hollywood on 99.3 KCLA FM. Dayna also performed in Hollywood and Las Vegas as the MC for a live comedy show and made a few cameo appearances on TV.

Today, DJ Dayna is based in Ohio and performs at various events throughout the state. She appears as a DJ/MC and sails onboard major cruise lines as a Guest DJ Entertainer. She became an official DJ for the Scratch Music Group in 2012 and is also a proud member of the ADJA.

Dayna is a contributing writer for Mobile Beat Magazine. Once a month you can find her volunteering at the Seacrest Studios inside Cincinnati Children’s Hospital, where she does a 1 hour radio/tv show for the patients.